A sensory deprivation game in which players must manage their senses and abilities to destroy or evade their opponents.

Darkgame has been featured in various art and game festivals, including Sundance, Indiecade, and many others. 2011.

In Darkgame, players must choose which of their avatar’s abilities and their own senses are most important, and sacrifice the rest. For example, players might overpower their abilities of sight and completely give up their hearing abilities, or make their avatar incredibly fast but incredibly weak and unreliable. Then a player either hunts the other player or must avoid being killed by the other.

This game features a unique piece of hardware, a spider-like headset that aids in tracking other players. The headset has eight points of contact with the player’s head and vibrates to indicate in what direction a target is located. Thus even if a player has sacrificed both hearing and seeing, the player can still sense the location of other entities in the game. Darkgame is designed so that deaf or blind players can play equally well as hearing and seeing players. 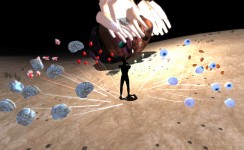 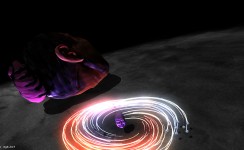 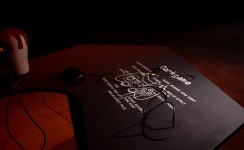 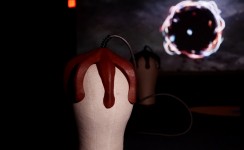 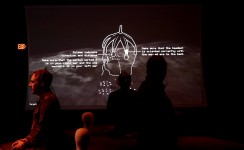 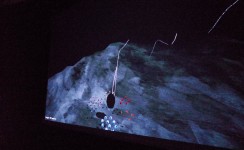