A two-player competitive shooting game uses Leap Motion for skeletal hand and finger tracking. Inspired by arcade style shoot ’em ups and fighting games, Project Hand Cannon intentionally creates an asymmetrical competitive experience. The final game is a twist on the traditional formula common in shoot ’em ups in which the comparatively smaller and more vulnerable player must take on a massive and powerfully destructive boss enemy. Here, one player controls the boss, which turns this traditionally single-player experience into a competitive multiplayer game. Both players are completely different – they have different movement, different weapons, different damage resistance, and different control schemes – yet in theory there is potential for a balanced competitive experience to emerge from this apparent asymmetry. Particular aesthetic inspiration is drawn from the Japanese doujin game Warning Forever, which has a similar segmented, spiderlike aesthetic to some of its bosses.

The engine is written from scratch, and implemented in Processing. 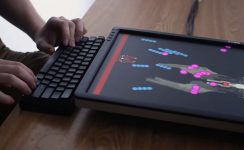 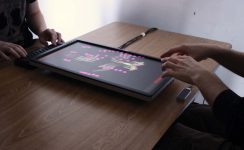 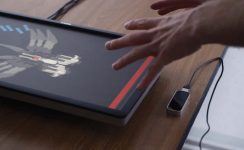