Strategize your job, risks, and alliances in order to escape your humble surroundings and make it to the good life.

This game adapts George Saunders’ story “Sea Oak” into a multiplayer game on a multi-tiered board. The goal is to reach the mansion on the highest tier by gathering enough money to move up in the world. Players start with $200 on the lowest tier of the board and gain or lose money as they move around and land on Opportunity and Challenge cards; if a player has enough money when passing a Level Up space, the player moves to the next highest tier (or wins if already on the third tier). On the second and third tiers, Challenge and Opportunity card values are doubled and tripled, respectively, so the possibility of succeeding or failing miserably is accelerated the higher a player goes.

Each character plays as an “archetype” based on the characters of the story (the Narrator, Jade, and Min) and can play as an additional archetype (Aunt Bernie) if his or her money runs out. The archetype a player chooses affects gameplay; the Narrator and Jade receive different benefits and penalties on different cards, and Min, while she earns less from Opportunity cards than the Narrator or Jade, can join up with another player for a mutually-beneficial partnership. The Aunt Bernie archetype functions similarly to Min, allowing a partnership with another character, but once players take on the Aunt Bernie archetype, they don’t get to play their own turns and can only win if the player they’ve partnered with wins. Aunt Bernie must also verbally abuse her partner for one minute for each of the partner’s turns.

A player wins by reaching the third tier of the board and passing a Level Up space with $1400. 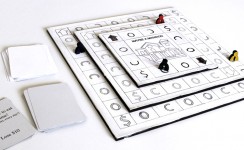 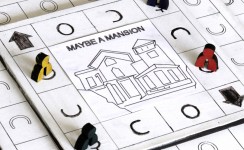 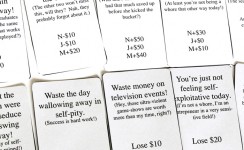 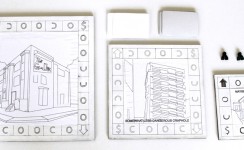