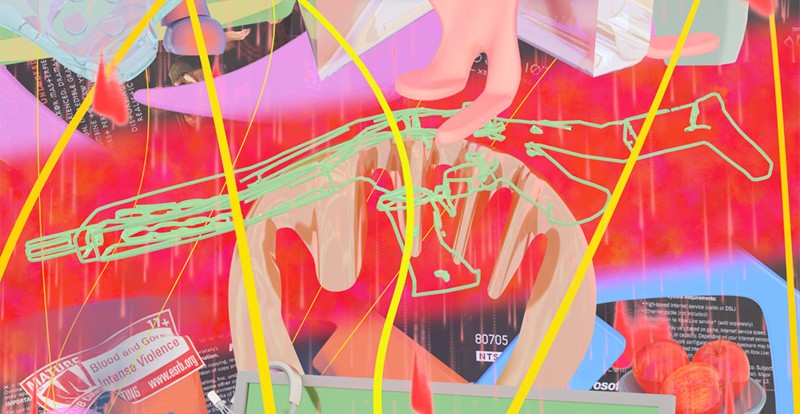 Today we interview Rui Hu, artist and recent MFA graduate of Design | Media Arts about his thesis exhibit work in Delete Me. Rui Hu is a Los Angeles-based artist working primarily with digitally mediated images and objects. His work often grows out of dissecting certain systems or categories, and often invites and engages with the tension between form, fiction, and language.

What are some of the themes that interested you in approaching creating this new body of work?

I’m thinking about how the digital space entangles with our physical world. Internet subcultures in general are interesting for me, but I’m looking especially at the part where they catch attention by making an impact on people, physical objects and places. For the references in the work, there is an investigation report of school shooters spending an entire chapter talking about video games, a former lawyer devoting his career trying to bring down certain video game companies, cops arresting the wrong person based on a re-routed IP address, and anonymous chatroom users gathering in masks to protest Scientology, etc. These events that shows the infiltration from the virtual to the physical space are particularly interesting to me.

Are you making fun of games and game culture?

I have not been a super active gamer myself, mostly due to outside constraints such as not being allowed by parents as a kid, not owning a console, or not having enough time. But I really like video games and game culture in general. I would play youtube videos of game reviews or playthroughs when I’m working, or read game-related articles on my phone when I’m on the toilet. And yes, there might be a little bit of making-fun of video games and game culture in my work, not in a hostile way, but more like a comedian making fun of themselves and their friends.

Are you implicated in the negative associations of gamer culture as well through your artwork?

Yes. There are items in the work that are often associated with the stereotypical negative image of gamers, such as instant noodle and monster drink. Some of the works also deal with the entanglement of violent video games and real-world violence. These are all non-conclusive issues, and I hope that the images function as complex, layered collections pointing to different areas of activity and discussion.

Who does the Gumby-like figure represent to you?

First of all they are anonymous figures. They are the people sitting in front of the screen and you can only see their back. They are represented by a made-up username, or simply “Anonymous”. They’re faceless and nameless, tired and hurt. They are stripped down to only having a human shape and flesh tone. But they are also part of myself and ourselves.

How did you choose the soundtrack for your work?

The soundtrack for the game piece, Room No.2, A First-person View, is the song “Hey You” from Pink Floyd’s album The Wall. I took out most of the vocal so the players mostly only hear the instrument. In the game environment, there are large screens showing the lyrics of the song on top of cut scenes from video games, so it is almost like a Karaoke room. The band and the album have been my favourite, but I chose this song particularly because I felt a parallel between the content of the song and my work, even though there is a gap of almost 40 years in between. The music talks about a metaphorical wall that encloses the character and he can never break free from it. It is about loneliness and separation. In this game piece of mine, the player is literally trapped in a big room built with gigantic keyboards and computer screens as its wall. It is as if the game is broken and the player can never find a way to finish the current level, forever stuck in a world of violence and destruction.

The works are each titled Room and a number? This makes me think about levels in a game or rooms in a RPG. Does each work sits as its own room in that context?

Yes! The word “room” has many meanings for me. It can be a level in an RPG, or a room in an escape-room type of game. I was also thinking about a physical room, the bedroom or the gaming room of a gamer, which often features certain unique decorations. And yes, in this series of image, each one sits as its own room, and they are also interconnected just like an apartment or any other building. Each room is an arrangement of objects and imagery constructed around one of a few specific character, stories, or topics. However, although with “room” as title, the image does not represent a coherent 3D spatial environment that the viewer can imagine entering. Instead, each “room” is sometimes spatial, sometimes flattened. It is a metaphorical room, an associative collection and a forensic experience with specific character, stories, or topics.

Photos from Rui Hu. You can see more of Hu’s work at his website.