To preserve a world where nothing you’ve seen is worth preserving.

In an article titled ​”Gaming’s Forever War: Halo 2 and 9/11″,​ Andrew Carroll describes the first level of Halo 2, the first game in the still running Halo series: “A lone warrior volunteers to martyr himself. The two Long Sword fighters fly by to give the Master Chief an entry way. The hero surviving a fiery death guided by a voice in his head. Using the aliens’ own equipment to destroy one of their monumental symbols of superiority.” Games in the 2000’s were particularly egregious in their warmongering ideology: recall Halo’s cathartic masculine self-sacrifice or Call of Duty’s constant ramblings about taking the gloves off, crossing lines, and ignoring red tape. Dark Souls​ is game about a fraying world. Withered lords, their power slowly burning away, task the player with taking up their mantle, to travel through a dying kingdom populated by mad adventurers, where time is literally falling apart. This is all for the purpose of that world’s continuation, to restart the cycle again. – to preserve a world where nothing you’ve seen is worth preserving. I was interested in combining a difficult traversal system, ‘retro’ pixel art, symbols from these FPS games, and the misleading missions from ​Dark Souls​ to make something that speaks to the tired and troubling recursion of these themes and symbols, while also exploiting their resonance. 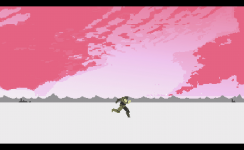 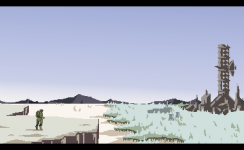 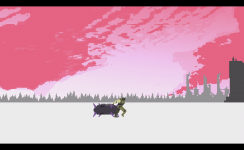