A 2 to 4 player competitive game. Players must beat their opponents to the center of the board by managing both their health and morality levels.

This game is adapted from the short story “The Delicate Prey” by Paul Bowels. The story is about three leather merchants in the Sahara Desert and their encounter with a Moungari, a respected person from a holy place, who deceives and kills the merchants in gruesome ways. At the end of the story, the people of the city of Tessalit discover the Moungari’s deed, they take him to the middle of the desert and bury him up to his head in sand to await a slow death.

As players move through the game, they pick up “encounters,” which allow them a variety of actions: attacking or befriending opponents, healing themselves, or smoking hashish to gain temporary invulnerability. Attacking opponents and reducing their life to zero is one way to increase your chances of reaching Tessalit at the center of the board first, but doing so reduces your morality. The more violently you attack your opponent, the more seriously your morality is affected; for instance, the “Slice a Throat” encounter takes 50 from your opponent’s life and almost certainly kills him or her, but it decreases your own morality by 30 points. On the other hand, you can increase your morality by using the “Befriend” encounter on an opponent, but he or she also regains 10 life. As either your morality or life reaching zero puts you out of the game, it’s important to decide how best to interact with your opponents as you move towards the center. 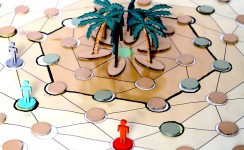 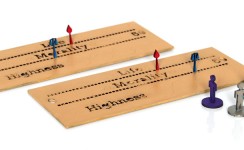