While sport fencing has a high regard for sportsmanship, safety and camaraderie, En Gore does not. In this game, players attempt to hack off the opposing player’s limbs while parrying attacks on their own. Players move towards the center strike stone by completing mini challenges, or face-off to resolve ties.

Players “battle” by attempting to roll their marbles into the center hole, or the “kill zone.” In some cases, once one player lands their marble in the kill zone, the other player has the chance to “parry” by knocking the marble out with their own. If they fail, the losing player suffers the loss of one of their limbs. These limbs are represented by spaces on the board, and when these spaces are pierced they spurt red paint to represent the bloody attack.

The first player reduced to a limbless torso loses. 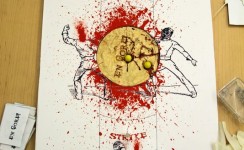 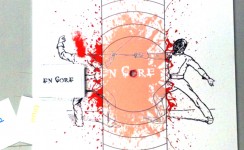 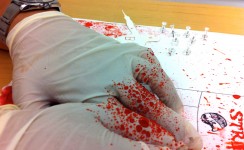