The year is 2222. Earth has frozen over and there are no survivors.

The year is 2222. Earth has frozen over and there are no survivors. A visitor from
another planet roams the cold, desolate landscape littered with debris on an exploration mission. Each it ventures further and further from its base camp atop a hill in search of clues that may explain the planet’s demise and logs items in a database as part of its research. Its large feet leave a trail that is quickly covered by falling snow. Daylight is choked by a cool blue haze and night brings darkness and brutally windstorms.

In spite of this daily routine, the planet is changing. The sun pierces through the thick layer of fog and begins to warm the frozen earth beneath. Snow is beginning to melt, revealing hidden treasures and signs of past life. A giraffe head surfaces from the snow and begins to thaw. Strange tracks appear in the snow and it becomes harder and harder to navigate though piles of exposed debris. 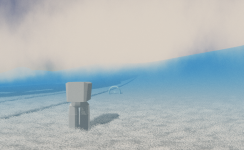 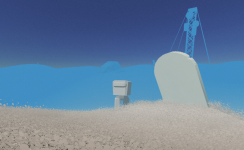 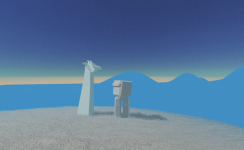 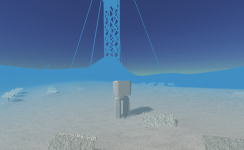