This 2-vs-1 game takes players through various storylines, culminating in a battle between two ghosts and their murderer.

Drawing from the George Saunders story “CommComm,” this game pits a team of two against a team of one, as Giff and the narrator (Main) attempt to stop Rimney’s plot to hide the ancient corpses found at the company’s new dig site. The game is broken into four scenarios and three optional subnarratives, all of which reflect different events or backstories in “CommComm.”

Players choose how to distribute their personal resources into Movement Points and Health Points, then play out a series of mini-games on different boards loosely representing settings and events from the story (e.g. Giff and Main try to stop Rimney from re-burying the body). Each of the three main mini-games have a space to trigger an optional subnarrative game about one of the characters’ backgrounds (e.g. the murder of Main’s parents, Rimney’s duty to care for his disabled wife). Each game has different rules and goals, but the winning team of each earns a soul token. Soul tokens are used in the final scenario, a confrontation between the spirits of Giff and Main, and their murderer, Rimney – the more soul tokens each team has, the more special abilities or attacks they have. The game ends either when Rimney dissipates the lingering spirits of Giff and Main or when they succeed in killing him. 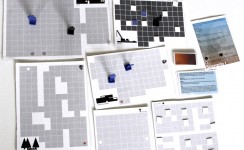 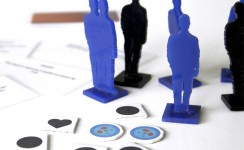 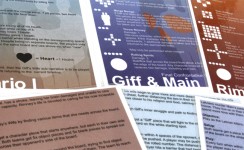