A three player cooperative game. Players must work together to escape an increasingly haunted house before it turns them against each other.

Scatter is based on Kelly Link’s short story Stone Animals, in which a family that has just moved discovers not that their house is haunted, exactly, but that their possessions and even they themselves are becoming haunted as they live there. They begin ridding themselves of their belongings and even blocking off whole rooms of their house.

In the game, Catherine, the pregnant mother, and Tilly and Carleton, the children, must try to escape before the house consumes them, represented by the slow approach of the rabbits outside the house. As they search for the keys that will allow them to get out of the house, a special die triggers events – either the rabbits draw closer to the house, day or night approaches, or an object in the house becomes haunted. The higher the number of objects haunted, the more haunted the house as a whole becomes, and the more the game frustrates the players’ attempts to navigate the board. Players must strategize between destroying haunted objects in the fireplace, thus reducing how haunted the house is, or searching for keys and escape before the rabbits reach the house and all is lost. When night has fallen, each character has additional attributes; when the house is at a low haunting level, these attributes help the player, but if haunting is high, they hinder the player’s activities. Even if both keys are found, if the house is too haunted then escape is only possible for one or two players. Players with the means to escape must decide whether to save themselves and doom their family, or to risk their own escape to help the others out.

In terms of game construction, the house and the rabbits are made of wood, while the humans and their various possessions are made out of plastic of either bright white or translucent colors. This clash is meant to emphasize the unwelcome intrusion of the family and their belongings in the more traditional environment of the house. 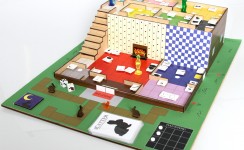 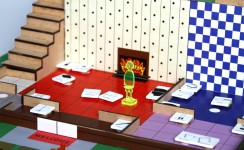 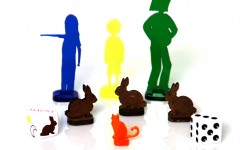