One cup of juice is a game that converts a two person human relationship into an orange juicing machine.

Created for the 2015 Game Art Festival

One cup of juice is a game that converts a two person human relationship into an orange juicing machine. The game platform is a horizontal stool that rises two feet off the floor, with a juicer at its top right corner. The physical player becomes a machine and simulates the mechanics of a juicer by lying vertically on the platform and attempting to juice the orange into a measuring cup by manually puncturing it. While the physical player struggles to juice the orange, the mental player encourages the completion of the juicing. This relationship introduces human emotions, such as trust, encouragement, negotiation, and compromise, into the machine process. Together, the players have one minute to successfully produce one cup of juice. If the juice meets the measurement in the container the mental player is awarded a juice box they can decide to share, or not. 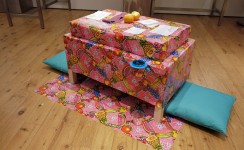 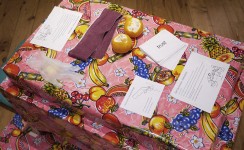 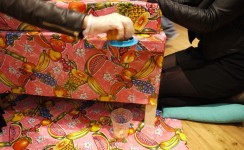 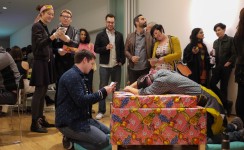 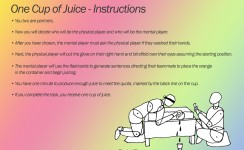 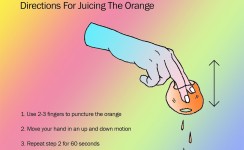