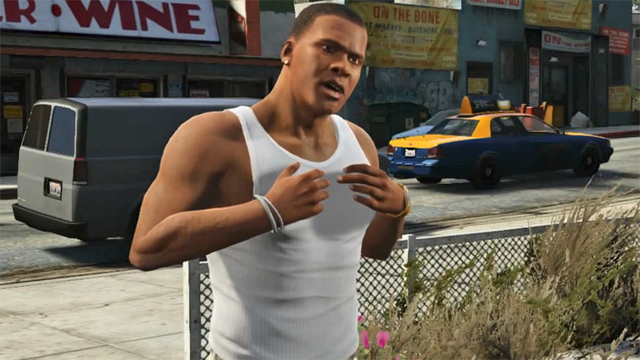 I’ve been endlessly driving through the streets of Los Santos née Los Angeles, trying to complete the main storyline of Grand Theft Auto V, the latest title in the “let’s print money” franchise by Rockstar Games (to the tune of a billion Washingtons in just three days after release). Players, too, can make it rain (virtually) at the Vanilla Unicorn, a strip club one eventually acquires. But in my experience of game play thus far (both stand-alone and online), the most vexing return on my investment has not been financial but existential.

Whether toggling among one of three playable personas in the stand-alone version—or waiting for glitches to resolve in the online game—players will spend a disconcerting amount of time disembodied, floating in the clouds above Los Santos (a visually stunning vantage point giving credence to the cliché that Los Angeles is most beautiful at a far remove). Eventually, the player falls back to Earth and into the waiting arms of a camera position behind one of three playable characters. Once re-embodied, beauty surrenders to the franchise’s beloved, street-level brutalities and a sandbox of crimes just begging to be committed. But glitches in the first two weeks of online play—and the fragmented nature of trying to control three different characters—makes playing-at-being in the world of Los Santos a spasmodic existence.

When not floating above the city in a literalized metaphor of cloud computing with a dodgy connection, players must endure the most earthbound feature of GTA this fifth time around: the cutscene scripting. Playing as Franklin, the sympathetic, “street” (aka, African American) avatar, one’s ears are thrashed with a torrent of hackneyed N-bombs delivered by Franklin’s childhood friend, Lamar, and his buddy, Stretch. These scenes stray into parody through repetition: perhaps the most transgressive and yet selectively re-appropriated word in modern American culture is hammered into meaninglessness by hyperbolic excess. If GTA V proves nothing else, it is almost possible to build an entire sentence out of N-word subjects, verbs, and objects.

Taking offense on racism grounds seems like an overkill response; it’s the sheer banality of Franklin’s discourse—whether parodic or sincere—that drags me down. (Online, players often adopt the slang of the game, thereby extending its diegesis into a performative register broadcast through their headsets. This is a curious—and sometimes irritating—form of harmonic resonance, a kind of sympathetic behavior. More pessimistically, it may also just be the way some people relate to each other IRL—a thought that makes Franklin’s reflexive N-bombing more creditable, I suppose.)

While Franklin struggles to escape the streets of digital Compton, the Franklin I play remains trapped by his characterization (caricature may be more precise). Coherent, cohesive play is already in peril in GTA V, whether by dint of technology or intent of design. And yet I’ve little choice but to pull the plug on Franklin preemptively whenever possible—and switch to Michael or Trevor, the other two playable characters—rather than endure the tired verbal spew he both gives and gets. But mostly, I pity the guy; Franklin’s poorly authored essence thwarts his very existence at my hands. My Franklin aspires to better than what the game designers have imposed upon him. If only we could transcend our respective positions–his on the street, mine in the clouds–GTA V would be as good as it looks from a distance.