A monkey must navigate through a hostile environment with the help of a robot built from pieces of his spaceship.

This is part of Space Monkey, a collection of games that combine traditional controls and gameplay with physical performance and costume interfaces.

The monkey must make his way through a hostile industrial setting with the assistance of a giant robot made up of spaceship junk. The monkey is controlled by the player, while the robot is controlled by two actors who must rely on verbal cues provided by the player and the audience. One actor controls the robot’s feet and can perform basic movement as well as a special stomp action; the other actor controls the arms of the robot and may pick up and throw objects in the game, including the monkey, and swat enemies by making slapping motions. A single six-axis accelerometer placed on the actors’ ankles and hands detects these actions and relays them to the computer.

The player and actors must work together to overcome environmental obstacles such as blocked passageways, icy water, traps, and locked doors, as well as fight off enemy robots who swarm the monkey. The actors can either stomp the ground to shake the enemies off the player, or swat them away using the robot arms. 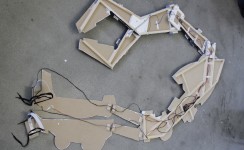 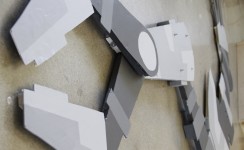 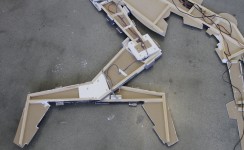 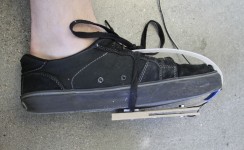 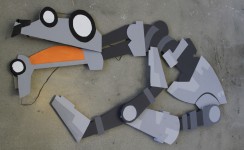