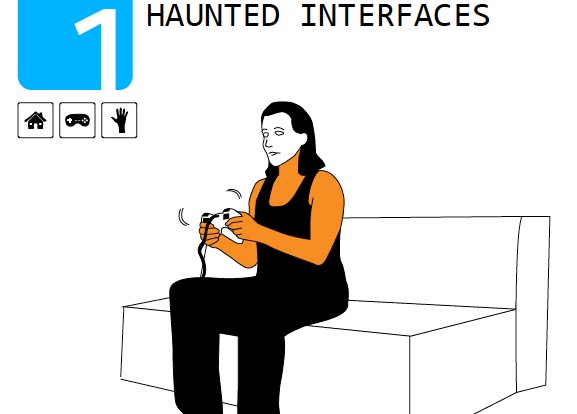 “Haunted” interfaces, sensor tricking, and cell trances are just a few of the gadget-enabled gestures cataloged in the fascinating online publication Curious Rituals: Gestural Interaction in the Digital Everyday. Produced by researchers working last summer at the Art Center College of Design in Pasadena, CA—Nicolas Nova, Katherine Miyake, Nancy Kwon, and Walton Chiu, along with Dan Hill and Julian Bleecker—this recent work investigates the pervasive—but often overlooked—gestures and behaviors that emerge from our co-habitation with electronic devices, such as waggling a dying remote in front of a TV, or rapidly inserting and ejecting wonky DVDs as an “obsessive fix.”

The impetus for the project in part is the cultural misperception that digital devices and their interfaces somehow render users passive, even paralyzed. As one of the researchers frames in the introduction to Curious Rituals, casual use of the term “digital” often neglects its original definition—manual manipulation:

The hidden assumption behind the use of such an adjective is that these digital artifacts are not very engaging from a physical standpoint. That is, people sit at their desks with their laptops; couch potatoes play games on their sofas; commuters stare at their smartphones in their smart-phone with blue-glow faces. But is this clichéd version of the everyday life true? Are we really so immobile when using the vast panoply of digital apparatuses? (7)

As Curious Rituals confirms, digital interfaces are digital in the fullest sense, providing affordances for physical behaviors and actions that may come from other contexts—such as “pinching” a touch screen—or simply emerge from human adaptation—such as hip-checking a security door or turn-style to scan an ID tag in one’s pocket. Some devices even encourage sympathetic or “useless” body movements and behaviors for which the interface has no use—what the researchers call “haunted” interfaces.

Video game designers and players likely recognize this phenomenon from observing “excessive” player actions: ducking, twisting, turning, and other spontaneous reactions in the heat of game play—“inputs” that non-motion-sensitive interfaces in particular would find inscrutable. But this surfeit of bodily interaction has its uses; according to the authors, observations of player movements influenced the design of the latest generation of touch and motion-control interfaces. As the array of current video game controllers attests, one interface’s “ghost” can become another’s “embodied” resident.

Beyond the scope of the Curious Rituals project, however, lurks another ghost: interfaces and gestures that, through obsolescence, have become lost or replaced. TV side-slapping as a “naïve fix” for horizontal and vertical hold, for example, went into decline with cable, but the gesture was both an expression of skillful finesse and a cultural icon of media frustration. More recently, the iPod click wheel has become an endangered interface, now only appearing in the “classic” line. The loss is acutely felt (and eloquently mourned by fan communities), as the click wheel expertly paired the orbiting thumb with the security of cradling the device with the rest of the hand. The largest barrier to device adoption/adaptation may have nothing to do with learning new interface schemas and their attendant gestures—ultimately, forming new habits—but rather having to someday (all too soon) let them go.