Mleko a Miód is an RPG based on Jewish and Central/Eastern European folklore and late 19th century Jewish life that uses magic as a key element.

Mleko a Miód is a mod of Apocalypse World and a world building exercise based on Jewish and Central/Eastern European folklore and late 19th century Jewish life. Players roleplay as people from various professions and nations including Ashersleben, Domovina, Vlast, and Płowce. The former serve the purpose of creating stratified classes (like D&D) and the latter serve only to create ambience and story building material for the GM.

The key element in this mod is its system of magic, which is loosely based in gematria (Hebrew numerology). All players have access to spells, and the meaning of these spells is up to the players’ imagination (within reason). Players roll a die with the Hebrew alphabet twice and if they manage to create a word on the index (accessible to the GM) they may add that word to their lexicon and interpret its meaning.

The way that industries (classes) differ in this respect is the number of spells they may store in their lexicon at one time and the modifier for spell casting and spell resistance rolls. The other important aspect of this game is its monsters. These are all folkloric creatures with some liberties taken with regard to their origin (ex. Chernobog is a demon of high standing, as opposed to a pagan god). These creatures and their descriptions are mostly suggestions upon which to build a short story for the players, but, should the players wish to add these characters to their party for whatever reason, there are base stats for each type of monster. 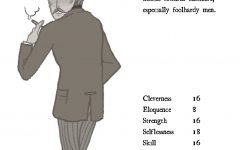 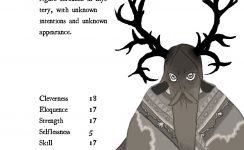 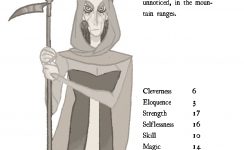 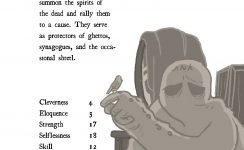 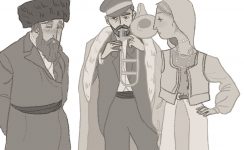 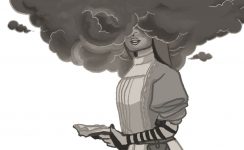 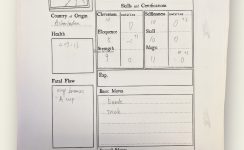 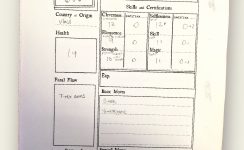 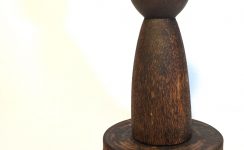